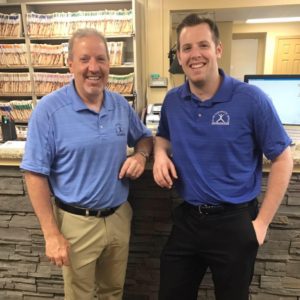 Dr. Bill Bazin has been a chiropractor for more than 30 years. He is a 1985 graduate of the Palmer College of Chiropractic in Davenport, Iowa. Now exclusively in private practice, Dr. Bazin has served as a chiropractic management consultant for “The Family Practice” of Marietta, Georgia. A lifelong athlete, Dr. Bazin was captain of the Palmer College rugby team, as was able to compete against nationally ranked teams while playing for Palmer. He also played on the Palmer College hockey team and currently enjoys running, biking, and being outdoors. He also finds time in his busy schedule to serve as team chiropractor for several hockey and lacrosse teams and has also served as chiropractor for the rock group The Eagles and The Gloria Estefan Band.

Dr. Bazin’s passion for chiropractic began as an infant when he got his first adjustment from his father, Dr. Roland Bazin. The senior Dr. Bazin was inspired to become a chiropractor when his daughter Donna’s life was saved by a chiropractor, who adjusted her, and enabled her to recover from injuries sustained as the result of a vaccine reaction. Now, Dr. Bill Bazin spreads the word of chiropractic by teaching his patients the importance of living with a healthy, interference free spine. Dr. Bazin met his wife Liz while attending college in Iowa. They have been married since 1987 and have 3 children, Alex, Brian and Camryn.

Dr. Brian Bazin is a third-generation chiropractor who was born and raised in East Longmeadow, Massachusetts. His passion for chiropractic began as early as preschool when he was caught trying to adjust his fellow students on the playground.

It was that undying passion for serving others that led him to devote his life to the chiropractic profession and helping those in his community.

Brian pursued undergraduate studies at the University of Massachusetts, helping him earn his
bachelors of science degree. He continued his education at his Father and Grandfathers Alma Mater, Palmer College of Chiropractic, where he mastered his skills in a variety of techniques including Gonstead, Diversified, and Thompson. He earned his doctor of Chiropractic degree in October of 2017 and has been serving the greater Springfield area ever since.

Brian spends his free time playing hockey, golf, softball, and enjoys spending the winter months
snowboarding in the mountains of Vermont. He believes that staying active and getting adjusted are the keys to living a long, happy, and healthy life.

Dr. Sarah Nordbeck was born and raised in Wisconsin Dells, Wisconsin. From a very young age, she knew she wanted to help people. After suffering from migraines for 10+ years, she finally found relief through chiropractic care. This inspired her to pursue a career in chiropractic. She earned her undergraduate degree in Biology and Chemistry at the University of Wisconsin – Stevens Point before pursuing her doctorate degree in 2017 from Palmer College of Chiropractic in Davenport, IA – the Fountainhead of Chiropractic. After moving back to WI for a short time, she moved to Connecticut where she served in a large family practice for 2 years before joining the team at Bazin Chiropractic Office. She is very thankful to now be working closer to home and serving her own community of Enfield. Dr. Sarah has a special passion for serving pregnant women and children. In her spare time she is an avid runner, enjoys reading, and loves anything that involves the outdoors.